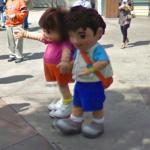 By kjfitz @ 2013-03-23 19:23:35
@ 34.138381, -118.354687
Burbank, California (CA), US
Dora the Explorer is an American animated television series created by Chris Gifford, Valerie Walsh, and Eric Weiner. Dora the Explorer became a regular series in 2000. The show is carried on the Nickelodeon cable television network, including the associated Nick Jr. channel. It aired on CBS until September 2006. A Spanish-dubbed version first aired as part of a Nick en español block on NBC Universal-owned Telemundo through September 2006; since April 2008, this version of the program has been carried on Univision as part of the Planeta U block.
Links: en.wikipedia.org
1,120 views