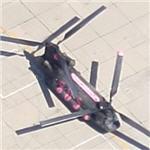 The Boeing CH-47 Chinook is a twin-engine, tandem rotor heavy-lift helicopter. Its top speed of 170 knots (196 mph, 315 km/h) was faster than contemporary utility and attack helicopters of the 1960s. It is one of the few aircraft of that era, such as the C-130 Hercules and the UH-1 Iroquois, that is still in production and front line service with over 1,179 built to date. Its primary roles include troop movement, artillery emplacement and battlefield resupply. It has a wide loading ramp at the rear of the fuselage and three external-cargo hooks.
Links: en.wikipedia.org
843 views