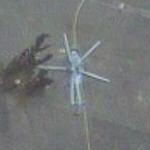 The Mil Mi-17 (also known as the Mi-8M series in Russian service, NATO reporting name "Hip") is a Russian-designed helicopter currently in production at two factories in Kazan and Ulan-Ude. Mil Mi-8/17 is a medium twin-turbine transport helicopter that can also act as a gunship. The Soviet Union specifically designed the Mi-17 for the Soviet war in Afghanistan.
Links: en.wikipedia.org
985 views