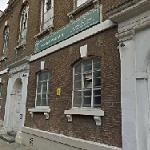 By Mike1989 @ 2013-04-08 00:49:42
@ 51.519274, -0.072014
London, United Kingdom (GB)
Brick Lane Jamme Masjid (Bengali: ব্রিক লেন জামে মসজিদ "Brick Lane Great Mosque") formerly known as the London Jamme Masjid (লন্ডন জামে মসজিদ "London Great Mosque"), is located in the area of Spitalfields alongside the street of Brick Lane and Fournier Street in east London, England. The majority of worshippers of the mosque are of Bangladeshi descent; the mosque serves the largest concentration of Bangladeshi Muslims in the country. The building at 59 Brick Lane previously served the religions of a succession of other communities in the area. Built during the 18th century, it is one of the oldest buildings in East London which still stands today.
Links: en.wikipedia.org
366 views