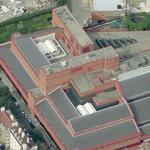 By kkeps @ 2010-08-18 18:26:52
@ 51.53024346, -0.12684741
London, United Kingdom (GB)
The British Library (BL) is the national library of the United Kingdom and the world's largest library in terms of total number of items. The library is one of the world's major research libraries, holding over 150 million items in all known languages and formats: books, journals, newspapers, magazines, sound and music recordings, patents, databases, maps, stamps, prints, drawings and much more. While it holds more items in total, its book collection is second only to the American Library of Congress. The Library's collections include around 14 million books, along with substantial additional collection of manuscripts and historical items dating back as far as 300 BC.

As a legal deposit library, the BL receives copies of all books produced in the United Kingdom and the Republic of Ireland, including all foreign books distributed in the UK. It also purchases many items which are only published outside Britain and Ireland. The British Library adds some three million items every year.

The Library is a non-departmental public body sponsored by the Department for Culture, Media and Sport. It is located on the north side of Euston Road in St Pancras, London, between Euston railway station and St Pancras railway station.
Links: en.wikipedia.org
604 views