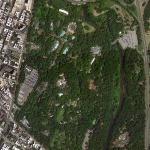 The Bronx Zoo is part of an integrated system of four zoos and one aquarium managed by the Wildlife Conservation Society (WCS), and is accredited by the Association of Zoos and Aquariums (AZA).
Links: en.wikipedia.org
4,965 views