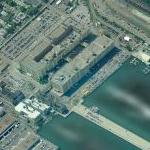 By kkeps @ 2011-01-11 13:33:12
@ 40.6438, -74.02762815
New York, New York (NY), US
The Brooklyn Army Terminal is large complex of piers, docks, warehouses, cranes, rail sidings and cargo loading equipment on 95 acres (380,000 m2) between 58th and 63rd Street in Sunset Park, Brooklyn. During World War II, the terminal was responsible for shipment of 85% of army equipment and personnel overseas. The building was sold to New York City in 1981 and was then totally renovated. It is now leased and managed by the New York City Economic Development Corporation as a center for dozens of light manufacturing, warehousing and back-office businesses.

Also known as the U.S. Army Military Ocean Terminal, the Brooklyn Army Base, or the N.Y. Port of Embarkation, it was designed by Cass Gilbert and built in 1918. It was was listed on the National Register of Historic Places in 1983. The listing includes 11 contributing buildings on an area of 97.2 acres (39.3 ha).

New York Water Taxi's Rockaway/Sandy Hook beach service is available at the Brooklyn Army Terminal to the Wall Street Ferry Pier, East 34th Street Pier, Sandy Hook Bay Marina, or Riis Landing on summer Fridays. New York Water Taxi used to serve the terminal during the rush hour and on summer weekends until those trips were indefinitely suspended due to lack of funding on July 2, 2010. Ferry service at this location became very important during the aftermath of the September 11, 2001 terrorist attacks, and the 2005 New York City transit strike.
Links: en.wikipedia.org
962 views