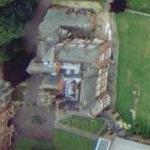 Though often stated as being built in the 15th century, it was actually built in the late 12th century, when records show it as being used to house the Bishops of Lincoln. The tall brick tower was added in 1475, protected by walls and a moat, and surrounded by an outer bailey. It was used by the bishops until 1842.
Links: en.wikipedia.org
506 views