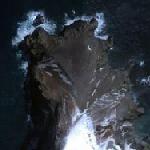 By Mike1989 @ 2013-03-15 05:42:49
@ -54.390904, 3.356967
Bouvet Island, Bouvet Island (BV)
Cape Valdivia (Norwegian: Kapp Valdivia) is the northernmost point on Bouvet Island, a subantarctic island administered by Norway. It lies in the centre of the island's north coast, immediately to the north of Olav Peak, the island's highest point. To the west lies Cape Circoncision, from which Cape Valdivia is separated by a five kilometre stretch of coastline known as the Morgenstiern Coast.
Links: en.wikipedia.org
398 views