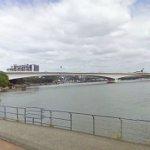 Captain Cook Bridge actually consists of two separate bridges, one for each direction of traffic. The bridge carries three lanes of traffic in either direction and links the M3 Pacific Motorway to the M3 Riverside Expressway. It is the main route from the city's south into the Brisbane central business district.
Links: en.wikipedia.org
359 views