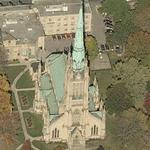 By adrbr @ 2008-06-09 18:26:08
@ 43.650614, -79.374066
Toronto, Canada (CA)
The Cathedral Church of St James in Toronto, Ontario, is the oldest congregation in the city. Established in 1797, the current structure was completed in 1844 and was one of the largest buildings in the city. The church cemetery was moved in the 1840s to St James-the-Less at Parliament and Bloor, although there are still unmarked graves under the modern parking lot. The church is listed as an Ontario Heritage Property and a National Historic Site and is the episcopal seat of the Anglican Church of Canada's Diocese of Toronto.

At 305 feet (92.9 m), the cathedral's spire makes it the second tallest church in Canada, after Saint Joseph's Oratory in Montreal. It was designed by Fredrick Cumberland and is a prime example of Gothic Revival architecture. It opened for services on June 19, 1853, and the clocktower was finished in 1874, with the clock being installed a year later. The total length of the cathedral is 198 feet, with a maximum width of 98 feet.

The cathedral's tower clock has five bells that still ring through the city today, and the chiming clock is "one of the finest examples of a chiming public clock anywhere in the world." The tower also houses a full peal of 12 change-ringing bells, the largest such peal in North America.
Links: www.stjamescathedral.on.ca
588 views