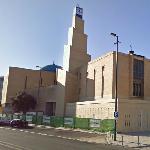 It was designed by architects António Maria Braga and João Paulo Conceição. The external features include a minaret and a dome. The mosque contains reception halls, a prayer hall and an auditorium.
Links: en.wikipedia.org
584 views