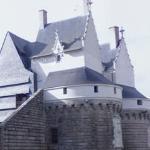 By LancelotLink @ 2010-11-07 08:35:23
@ 47.216951, -1.550048
Nantes, France (FR)
The Château des ducs de Bretagne (English: Castle of the Dukes of Brittany) is a large fortified château located in the city of Nantes, France. It served as the centre of the historical province of Brittany until its separation in 1941. It was the residence of the Dukes of Brittany between the 13th and 16th centuries, subsequently becoming the Breton residence of the French Monarchy.
Links: virtualglobetrotting.com
568 views