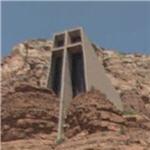 By kjfitz @ 2009-09-24 09:50:02
@ 34.831341, -111.766941
Sedona, Arizona (AZ), US
The Chapel of the Holy Cross is an iconic Catholic chapel built into the mesas of Sedona, Arizona, which was inspired and commissioned by sculptor Marguerite Brunswig Staude, student of Frank Lloyd Wright. Richard Hein was chosen as project architect, and the design was executed by architect August K. Strotz, both from the firm of Anshen & Allen. The chapel is built on Coconino National Forest land; the late Senator Barry Goldwater assisted Staude in obtaining a Special Use permit. The construction supervisor was Fred Courkos, who built the chapel in 18 months at a cost of US$300,000. The chapel was completed in 1956.

The American Institute of Architects gave the Chapel its Award of Honor in 1957. In the sculptor's words, “Though Catholic in faith, as a work of art the Chapel has a universal appeal. Its doors will ever be open to one and all, regardless of creed, that God may come to life in the souls of all men and be a living reality.”

In 2007 Arizonans voted the Chapel to be one of the Seven Man-Made Wonders of Arizona.
Links: en.wikipedia.org, redrockrealty.net
1,968 views