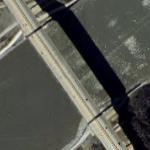 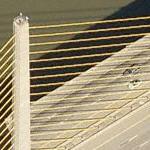 The DE-1 C & D Canal Bridge is a cable-stayed bridge. It is 4,498 feet long, has six lanes, and the main span has 145 feet of vertical navigational clearance above the average high tide water level, and 750 feet of horizontal navigational clearance. The C & D Canal bridge main span completely crosses the canal, and this was done to make it impossible for a ship to hit a bridge pier and bring the bridge down. The northbound and southbound roadways each have three 12-foot-wide lanes with 10-foot-wide left and right shoulders. The design is such that if one roadway has to be closed for maintenance, the other could temporarily carry four lanes (2 each way). The design is also convertible to eight lanes, by simply restriping the roadways. One construction contract for the entire bridge substructure and superstructure and was awarded on April 1, 1992, at $57.9 million (well under the engineering estimate), and the bridge opened to traffic in December 1995, with the final contract cost at the end of the project's construction tallying to $57,782,823.33.
Links: www.fhwa.dot.gov
2,102 views