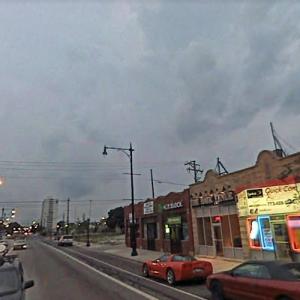 By Carrera @ 2018-05-10 14:06:12
@ 41.7655622, -87.6220637
Chicago, Illinois (IL), US
The C5's introduction in 1996 marked a drastically new chapter in the Corvette's production run; in the first model year of this generation of the Corvette, only fastback coupes and convertibles were offered. The C5 had a hydroformed box frame to improve structural integrity, especially in convertible form. A rear-mounted transaxle assembly, where the transmission had been relocated, and where the LS1 engine was connected, allowed for an even front-rear weight distribution. At first, the LS1 base models produced 345 horsepower, with an update in 2001 providing the engines 5 more horsepower. A drive-by-wire throttle and variable-effort steering make their debuts for Corvettes in this generation, and Active Handling System, introduced in 1998, was made standard in 2001. The base model coupes and convertibles can make the sprint to 60 miles per hour in 4.5 seconds, putting it on par with almost all premium sports car of its time, such as the Aston Martin DB7 Vantage and the Ferrari F355. In addition to competitive acceleration against other sports cars , its fuel economy was higher than most of them, with 19 city MPG and 28 highway MPG for models equipped with the 6-speed manual transmission; units that came with the 4-speed automatic had lower results, with 18 city MPG and 25 highway MPG. This was made possible by the car's relatively light curb weight that is under 3,300 pounds thanks to a reliance on run-flat tires when a spare tire was no longer made available (a first in the entire production run since 1953) paired with utilization of SMC (Sheet Molded Composite), a low drag coefficient, and the swift tendency to upshift into higher gears. Either way, this enabled the car to avoid the "gas guzzler tax" levied onto most other sports cars. Suspension choices ranged from the standard RPO FE1 that can come with the FE3 sport suspension inspired by autocross, or a F45 Selective Ride Control Suspension that lets drivers adjust between "sport" or "touring" ride characteristics. At first it was polarizing among customers, and some have went as far as criticizing the car to use outdated technology (e.g., OHV engine, leaf springs) and inexpensive materials, but these components are strong for their low weight and have been proven reliable; nevertheless, it had been seen as a great deal for customers looking for a high-performance car without resorting to the exotic or premium brands that were also available. The 2004 C5, along with the Lotus Esprit of the same model year, were the last production cars to use hidden "pop-up" headlamps that were prevalent from the 1970s to the 1990s.