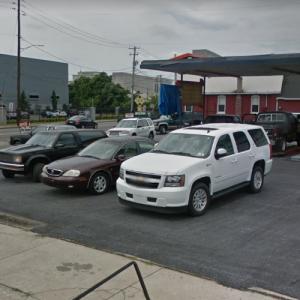 By Carrera @ 2018-05-07 17:59:39
@ 40.2726458, -76.8774696
Harrisburg, Pennsylvania (PA), US
Introduced in late 2007, the hybrid version of the Chevrolet Tahoe utilized a dual-displacement 3/6-liter V8 engine paired with two 80 hp electric motors. A two-mode hybrid system allows the vehicle to run on gas, electricity, or both by choice while at the same time monitoring torque and the battery's state. Energy for forward momentum can be regained by the wheels driving one or both electric motors thanks to "Regenerative braking". The RWD hybrid's city MPG is 6 miles more than a standard Tahoe. Because GM moved forward offering the introduction of the EcoTec engine for both the 2015 Tahoe and Yukon, the hybrid versions for both were discontinued after 2013.