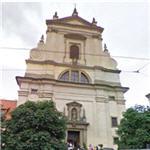 A chapel dedicated to the Holy Trinity was built on this site in 1584. With the Battle of White Mountain, 8 November 1620, the Counter-Reformation signalled the re-Catholicisation of Prague. The church was given to the direction of the Carmelites in September 1624. The triumphalist altarpiece of Our Lady of Victory was sent from Rome by Pope Gregory XV. The Carmelites were ordered to hand over the church to Joseph II, Holy Roman Emperor, 3 June 1784.

On 26 September 2009 Pope Benedict XVI declared the church and the Infant Jesus the first station on the Apostolic Road in the Czech Republic
Links: en.wikipedia.org
459 views