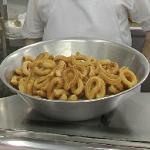 By Mike1989 @ 2013-04-12 12:54:37
@ 41.382186, 2.175171
Barcelona, Spain (ES)
A churro, sometimes referred to as a Spanish doughnut, is a fried-dough pastry—predominantly choux—based snack. Churros are popular in Spain, France, the Philippines, Portugal, Latin America (including Brazil and Spanish-speaking Caribbean islands) and the United States. There are two types of churros in Spain, one which is thin (and sometimes knotted) and the other which is long and thick (porra). They are both normally eaten for breakfast dipped in hot chocolate or café con leche.
Links: en.wikipedia.org
477 views