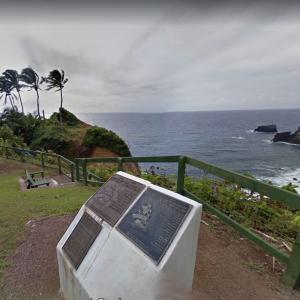 By BillHicks @ 2018-11-06 20:01:53
@ -25.0682438, -130.0975707
Adamstown, Pitcairn (PN)
In 1790 Fletcher Christian, led a mutiny on the HMS Bounty against esteemed British navy Captain Bligh. Bligh and a few of his loyal men were placed in a rowing boat and left in open Pacific sea. It was considered a miracle that Bligh was eventually able to navigate to a safe port (from which he could return to England). Such was the remoteness of the South Pacific section of sea the British ship was docked in. A mutiny in those days would mean capital punishment, should those guilty be foolish enough to return to British Empire land. Pitcairn is thought to be an Island where the mutineers had decided to attempt to live in and keep as low a profile as possible.

Although Christian is often romanticized in films, it is much more likely that he was a brutish man that was, mischievous in causing a mutiny. When Bligh returned to England the admiralty ruled in his favor and Christian and his co-horts were then marked as fugitives. The allure of tribal women and idealistic weather and scenery perhaps played a part. But British sailors were expected to put up with harsh conditions and tough work schedules. Most of Christian's mutineers later disappeared and were likely killed by a hostile South Pacific tribe in Tahiti.

This plaque commemorates their initial landing at Pitcairn. Listing names of the mutineers. A newer plaque alongside appears to show later tribal names (from 2005). Years after the mutiny Pitcairn Island was discovered as the place where the mutineers landed, (with just John Adams) still living there. Adams had incestuous relations and there were a large amount of children discovered as a result. The Bounty itself had been burned at some point after the mutiny.

Any perceived wrongs from the Islands early civilisation does not necessarily color the inhabitants and those governing the island today. This remote location is surely an interesting place for someone that likes adventure holidaying!
Links: en.wikipedia.org
187 views

BillHicks
@ 2020-03-02 20:44:17
If I re-call right one of the previous friendly tribes turned foe as Christian landed on their island. The men of the tribe had drawn arms. They did not want anything to do with British navy mutineers. No doubt aware that the men were facing capital punishment when or if they could be tracked. Hence the tribe knew they would be punished for harboring them. So they were chased off that particular island having previously been friendly. Just thought I would add that!