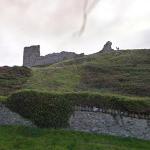 Because of its strategic location, it was a focal point in the war between England and Wales — eventually it was captured by Edward I of England in 1283 and rebuilt.

A Welsh rebellion in 1404 saw Criccieth Castle sacked and burned. The functional military life of the castle was laid to waste.

Today visitors can wander what remains of the castle and enjoy the spectacular views it provides
Links: en.wikipedia.org
409 views