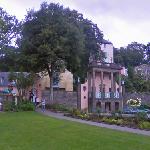 Portmeirion has served as the location for numerous films and television shows, most famously serving as The Village in the 1960s television show The Prisoner.

The village of Portmeirion has been a source of inspiration for writers and television producers. For example, Noël Coward wrote Blithe Spirit while staying in the Fountain 2 (Upper Fountain) suite at Portmeirion. In 1956 the village was visited by architect Frank Lloyd Wright, and other famous visitors have included Gregory Peck, Ingrid Bergman and Paul McCartney. Musician Jools Holland visited whilst filming for TV music show The Tube, and was so impressed that he has had his studio and other buildings at his home in Blackheath built to a design heavily inspired by Portmeirion.

Television series and films have filmed exterior shots at Portmeirion, often depicting the village as an exotic European location. Examples of this include the 1960 Danger Man episode "View from the Villa" starring Patrick McGoohan, the 1976 four-episode Doctor Who story entitled "The Masque of Mandragora" set in Renaissance Italy, and an episode of Citizen Smith in which the eponymous hero visits Rimini. The town of Wiggyville in Cbeebies Gigglebiz is shot in Portmeirion as well.
Links: en.wikipedia.org
610 views