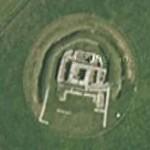 In King Haakon's saga, it is mentioned that after the last Norse Earl of Orkney, Earl John, was murdered in Thurso, his killers fled to Wyre. They took refuge in the castle, which was so strong that the besiegers had to thrash out a deal with them to get them out.
Links: en.wikipedia.org, www.aroundrousay.co.uk
535 views