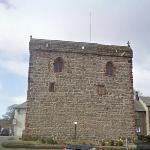 By kkeps @ 2010-04-09 08:34:58
@ 54.155539, -3.185969
Dalton-in-Furness, United Kingdom (GB)
The 14th-century pele tower, now known as Dalton Castle, stands almost hidden by surrounding buildings. It was built around 1330-36 to provide a place of refuge for the monks of of nearby Furness Abbey against Scottish raiders. The Castle is similar in construction to many of that period, built as a rectangle 14 by 9 metre with walls at between 1.5 to 2 metre thick. Built from local limestone with red sandstone dressings seen around the openings. Originally the entrance was at ground level on the south side, with a spiral staircase leading to all floors and roof. This was blocked up around 1704, and present west entrance used.

On the Dissolution of the monasteries, it passed into the hands of the Crown. By 1545 was in disrepair. Repairs were estimated at over £20 in 1546.

After the Castle was obtained by the National Trust from the Duke of Buccleuch, major restoration took place in 1968/69. There are now two floors above the ground floor. On display is some recently restored armour belonging to the castle. A guided tour around this small, but intriguing building gives a fascinating insight into the lives of the Abbot and monks of Furness, at one time amongst the most powerful in the country.
Links: www.nationaltrust.org.uk
529 views