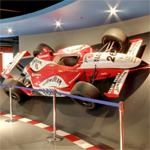 He won his first IndyCar race (and two more) in his sophomore season with this same team. In his third season with Andretti Green Racing, he won six times, including the Indy 500 and the season points championship.

Wheldon won his second Indy 500 in 2011 just months before his fatal accident at the Las Vegas Motor Speedway on October 16, 2011.

This car is on display at the K1 Speed indoor go-cart racing business.
Links: en.wikipedia.org
422 views