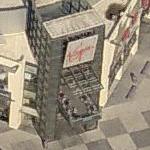 By kjfitz @ 2007-05-02 10:13:22
@ 28.370008, -81.521596
Orlando, Florida (FL), US
Virgin Megastores is an international chain of record stores, founded by Sir Richard Branson on London's Oxford Street in 1971. In 1979 the company opened their first Megastore at the end of Oxford Street and Tottenham Court Road. There are now over 120 stores throughout the UK (including Virgin xs and Virgin Xpress) and many more stores around the world, with an online store and a digital download service. In 2001 the Virgin Megastores worldwide were split between the Virgin Group and the Lagardere Group.The Virgin Group owns the UK, Ireland, USA and Japan stores while The Lagardere Group owns the stores in France, United Arab Emirates, Greece, Egypt and Lebanon.
Links: en.wikipedia.org
1,192 views