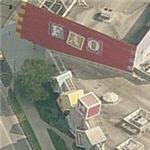 By kjfitz @ 2007-05-29 11:53:57
@ 28.43116, -81.470364
Orlando, Florida (FL), US
FAO Schwarz is the name of a high-end toy store chain founded in New York City in 1870 by German immigrant, Frederick August Otto Schwarz. The original name of the store was Toy Bazaar. (The company traces its history back to 1862 in Baltimore, when Schwarz first began retailing toys from his fancy-goods store there.) It is known for its offering rather exotic gifts for children, such as a gas powered, miniature Mercedes-Benz for children under ten costing several thousand dollars.
Links: en.wikipedia.org
5,231 views