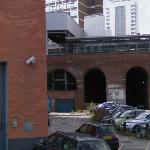 The tunnel had a single track and would have stored trams and other material for the tramway in Leeds.
Links: en.wikipedia.org
371 views