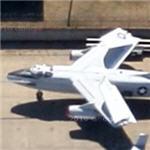 By kjfitz @ 2010-11-26 16:33:54
@ 36.939971, -76.297156
Norfolk, Virginia (VA), US
The Douglas A-3 Skywarrior was a strategic bomber built for the United States Navy and among the longest serving carrier-based jet aircraft. It entered service in the mid-1950s and was retired in 1991. For many years after its introduction, it was also the heaviest aircraft ever flown from an aircraft carrier, earning it the unofficial nickname "The Whale". Its primary function for much of its later service life was as an electronic warfare platform, tactical air reconnaissance platform, and high capacity aerial refueling tanker.
Links: en.wikipedia.org
428 views