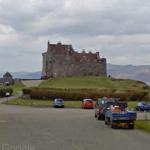 The castle was used as a location in the 1999 film Entrapment, starring Sean Connery (who has MacLean ancestry on his mother's side) and Catherine Zeta-Jones. The castle also features prominently in the 1971 film When Eight Bells Toll, starring Anthony Hopkins.
Links: en.wikipedia.org
724 views