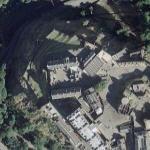 By kjfitz @ 2006-12-21 13:09:49
@ 55.94871, -3.20017
Edinburgh, United Kingdom (GB)
Edinburgh Castle is an ancient fortress which from its position on Castle Rock, dominates views of the city of Edinburgh, and is Scotland's most famous landmark. A stronghold has existed on this site since the 7th century. However, with the exception of the 12th century Chapel of St Margaret, there are only scant and much-altered remains of mediaeval fortifications. The King's Lodging, Great Hall and Half Moon Battery date from the 15th and 16th centuries.

Used by military forces since 900 AD, the castle was until recently administered by the Ministry of Defence. As Scotland's most-visited paying tourist attraction it is now in the care of Historic Scotland, who maintain the castle and the associated exhibitions. Part of the Castle however continues to be occupied by the British Army, and troops from the 2nd Battalion, The Light Infantry, based at Redford Barracks stand guard between the hours of 6pm and 9am.
Links: en.wikipedia.org
1,784 views