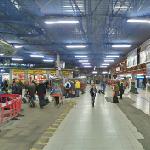 By Mike1989 @ 2012-07-27 16:25:17
@ 55.951947, -3.189608
Edinburgh, United Kingdom (GB)
Edinburgh Waverley railway station (referred to by Network Rail simply as Edinburgh but also commonly called Waverley) is the main railway station in the Scottish capital Edinburgh (the other being Haymarket). Covering an area of over 25 acres (101,000 m²) in the centre of the city, it is the second-largest main line railway station in the United Kingdom in terms of area, the largest being London Waterloo; and is both a terminal station and a through station, in contrast to the major London stations.
Links: en.wikipedia.org
605 views