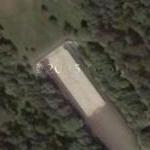 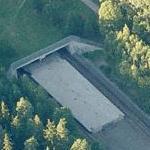 Kymlinge is Stockholm's "ghost station." It was built along with the rest of line 11 to Akalla in the early 1970s, when there were serious plans to develop the area around the station with either a mix of housing and offices, or with a very large number of offices, mostly federal agency offices. These plans never came to fruition because the municipality of Sundbyberg, where Kymlinge station is located, wanted to keep the area as green space. So there you have this station, between Hallonbergen and Kista, with its platform lying half in tunnel and half in the open, more than half ready for service -- but trains might never stop there.

Legends about this station have developed in Stockholm. They were connected with the legends about the subway cars of type C5, of which only eight were delivered; the C5 cars were silver, unlike the rest of the fleet, which is green and blue. (The new C20 cars are also partly silver on the outside, but the C5s were entirely silver.) The C5 was said to be a ghost train that took on passengers who were never seen again, and who later got off at Kymlinge. "Bara de döda stiger av i Kymlinge," it was said -- only the dead get off at Kymlinge....
Links: www.kynerd.nu
5,264 views