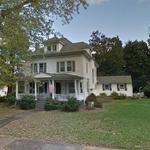 The house, located at 26 Westland Avenue in West Hartford, was declared a National Historic Landmark in 1975.
Links: en.wikipedia.org
664 views