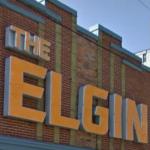 In 1979, Taylor was one of the founders of Cineplex Odeon Corporation, which still lives on today as Canada's largest film exhibitor; Cineplex Entertainment.
Links: en.wikipedia.org
652 views