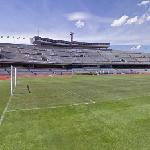 By Mike1989 @ 2013-06-12 12:53:04
@ 19.33151, -99.191909
Mexico City, Mexico (MX)
Estadio Olímpico Universitario is a multi-purpose stadium located in Ciudad Universitaria, Mexico City. It was built in 1952 and at that time was the largest stadium in Mexico. This stadium has a capacity of 68,954 . During the 50s and the 60s this stadium was used mostly for college American football matches between the largest Mexican public universities: UNAM and IPN. From the late 1950s it was used for football matches, some American football matches and athletics contests. It resembles a volcano, due to it being built in a volcanic stone surface.
Links: en.wikipedia.org, virtualglobetrotting.com
852 views