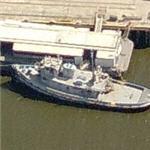 After her time in the Navy she became the fire boat for the port of Stockton, California. And recently returned to San Francisco Bay.
Links: hters.org
1,811 views