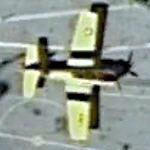 By kjfitz @ 2009-12-16 14:28:28
@ 37.77276, -122.30213
Alameda, California (CA), US
This North American T-28B has been beautifully returned to its original Training Command yellow with green markings denoting it as an instrument trainer. Some of these were fitted with gun pods for aerial gunnery training. The T-28C model is the same except it has a tail hook for carrier training.

Uses other than student training were: Towing targets for fleet gunnery, instrument proficiency training for single pilot aircraft squadrons and finally for desk bound aviators when four hours per month were required for flight pay.

Over 2200 were built in all models and flew in the respective liveries of twenty-one Nations. More than three hundred are still civilian registered, with half of that amount still flying.
Links: www.uss-hornet.org
536 views