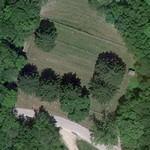 A headstone in the back row (11th) of a German POW buried at the site. This prisoner was hanged for the murder of Johannes Kunze.Fourteen German prisoners of war who were executed in 1945 (for the murders of fellow-POWs Johannes Kunze, Horst Günther and Werner Drechsler) in the military prison are buried in the northwest corner of the cemetery. An unknown lady of German descent, who resides in the nearby city of Leavenworth, visits the cemetery periodically to place flowers on their graves.
Links: www.findagrave.com, en.wikipedia.org
1,183 views