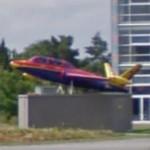 Although it is often lauded as the first purpose built two-seat turbojet-powered trainer aircraft, similar claims are made for the Fokker S.14 Machtrainer whose first flight, production, and service entry were all about year earlier. However, the Magister was much more successful than the Machtrainer, being produced in far greater numbers and being exported to many nations
Links: en.wikipedia.org
533 views