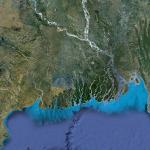 By Mike1989 @ 2013-03-16 10:25:32
@ 22.471955, 90.351563
Khulna, Bangladesh (BD)
The Ganges Delta (also known as the Ganges–Brahmaputra Delta, the Sunderbans Delta, or the Bengalla Delta) is a river delta in the South Asia region of Bengal, consisting of Bangladesh and the state of West Bengal, India. It is the world's largest delta, and empties into the Bay of Bengal. It is also one of the most fertile regions in the world, thus earning the nickname The Green Delta. The delta stretches from the Hooghly River on the west to the Meghna River on the east. It is approximately 350 km (220 mi) across at the Bay of Bengal. Kolkata (formerly Calcutta) and Haldia in India and Mongla and Chittagong in Bangladesh are the principal seaports on the delta.