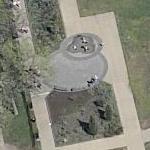 The German-American Friendship Garden in Washington, DC stands as a symbol of the positive and cooperative relations between the United States and the Federal Republic of Germany. Commissioned to commemorate the 300th anniversary of German immigration to America, the garden was dedicated on November 15, 1988.

As noted by President Ronald Reagan, who created the Presidential Commission to complete work on the project, “...I'm proud to announce a product of that commission: the dedication of a garden here in Washington as a symbol of the friendship between our two countries. In a few months, I'll be leaving the White House, but the garden, and all it represents, will remain, to be nurtured and sustained by the friendship between Germans and Americans…”

Situated on the historic axis between the White House and the Washington Monument, the garden borders Constitution Avenue between 15th and 17th Streets where an estimated seven million visitors pass each year. The garden features plants native to both Germany and the United States and provides visitors with seating and cooling fountains.
Links: www.ugac.org
1,119 views