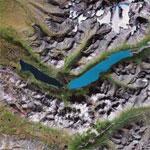 His was not the first cabin on Twin Lakes, nor was it the biggest. Proenneke's cabin, though, stands out for its remarkable craftsmanship, which reflects his unshakeable wilderness ethic. The cabin was built using only hand tools, many of which Proenneke himself had fashioned. Throughout the thirty years he lived at the cabin, Proenneke created homemade furniture and implements that reflect his woodworking genius.

Dick Proenneke had the foresight to film the construction of his cabin, intending to leave step-by-step instructions for creating a hand-built structure. He also kept detailed journals, recording everything from his daily activities to wildlife sightings and visits from friends and fans.

Proenneke's wilderness ethic was simple: Twin Lakes and the wildlife therein should not suffer for his presence. He reused almost everything, even carefully crafting buckets and storage boxes from used gas cans. This off-the-grid lifestyle resonated with people around the world.

In 1973, Proenneke's friend Sam Keith edited a volume of his journal entries entitled One Man's Wilderness (reissued in 1999). A documentary film, Alone in the Wilderness, was produced in 2003, and is often shown on Public Broadcasting stations. John Branson, Lake Clark National Park and Preserve historian and longtime friend of Proenneke's, edited a new group of journal entries in 2005 which were published as More Readings from One Man's Wilderness.
Links: www.nps.gov, en.wikipedia.org
14,712 views

If it were up to me, I would not allow "anon" posting!

Anonymous
@ 2017-06-09 07:10:36
Seeing Dick Proenekkes movies of him fishing woodworking and just living there for30 years brought tears to my eyes. Imagining him there in deepest winter cold and his loneliness affected me deeply and my respect for him holds no bounds. I wish I could have been some assistance to him. Now he is gone yet his memory does not fade. A great courageous gentleman...