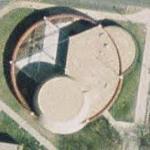 The Gheens Science Hall and Rauch Planetarium is designed to provide a unique learning environment primarily for astronomy and space science education. State-of-the-art multi-media projection systems extend this capability to serve a variety of disciplines and the facility further functions as a flexible venue for events, conferences and meetings.

Structural design elements are based upon a six pointed star reflected in concrete scoring and overhead trusses throughout the facility. A circular, sixteen-foot high wall punctuated by eight-inch vertical slits, inspired by ancient Stonehenge, encloses a large courtyard leading to the entrance. Large metal letters affixed to the wall identifies this as The Gheens Science Hall, in recognition of the Gheen's Foundation that provided major funding for the project.

A massive concrete truncated cone structure is the prominent design feature, with the words Rauch Planetarium repeated in silver letters along the uppermost circumference of the tower, honoring Rabbi Joseph Rauch for whom the original planetarium was named in 1962. This structural envelope encloses a fifty-five foot diameter hemispherical dome, tilted 12 degrees, which comprises the planetarium theater. The theater is designed for highly accurate presentations of astronomy, surrounding the audience with a 360 degree projected view of the night sky. Over 4000 stars will be projected from the Spitz 1024 projector manufactured by Spitz Inc. of Chadds Ford, Pennsylvania. Spitz Inc. was founded in 1946 and has installed over 1000 astronomical visualization systems worldwide.
Links: louisville.edu
745 views