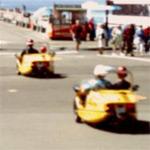 The three-wheeled, two-seat GoCar, which is gasoline-powered, is made by Trigger Technics of the Netherlands. Customized with black racing stripes down its snub-nosed hood, the yellow vehicle sports the good looks of a Mini Cooper and weighs only 386 pounds.
Links: www.nytimes.com
915 views