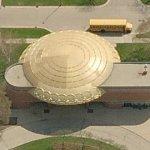 After the Fair ended, the theater was brought to S.C. Johnson's headquarters in Wisconsin. Frank Lloyd Wright was commissioned to create a new structure for the theater at the SCJ complex. It reopened to the public in July 1967.

Today, the theater is used for corporate conferences and community organizations. Every Friday, films are shown here as part of a guided architectural tour of the SCJ complex.
Links: www.scjohnson.com
774 views