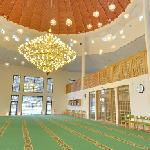 By Mike1989 @ 2013-04-06 07:49:27
@ 57.71484, 11.944277
Gothenburg, Sweden (SE)
'The Gothenburg Mosque was inaugurated June 16th 2011 and is located at the foot of Ramberget on Hisingen in Gothenburg. The mosque is funded by Saudi Arabia and run by the Swedish Muslim Foundation (SMS). The mosque cost 67 million Swedish krona to build and is 2000 square meters. The construction of the mosque has been met with demonstrations addressing the critique of that the funding comes from a dictatorship. The Saudi finance minister Dr. Abu Rachman al Seid said on the inauguration that "we do this out of kindness - and because we can afford it". The building is designed by Björn Sahlqvist, that wanted to design a mosque with a Scandinavian touch with a lot of light and space. There is a silent square minaret and prayer rooms for men and women, conference rooms, offices, lecture halls, kitchen and an ablution area.
Links: en.wikipedia.org
467 views