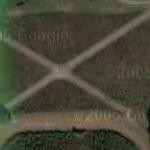 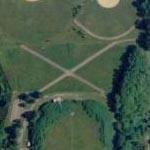 By kjfitz @ 2005-08-15 16:24:30
@ 42.978868, -85.66614
Grand Rapids, Michigan (MI), US
The Grand Rapids Project was made by Robert Morris in 1974 on an eroded hillslope in a city park near downtown Grand Rapids, Michigan. It is known as the first major art earthwork to be supported by government funds, including from the National Endowment for the Arts. Construction involved recontouring the hill and adding paths, one ringing the top of the hill (around a huge, concealed water tank), and another set of paths along the graded face of the hill, which meet in the middle forming a visible ?X' on the hillside. Erosion was controlled by a drainage system, with buried pipes. To some degree this piece is a civil works project, where a slope was stablized, protecting recreational areas below and a storage tank essential to the city's water supply at the top. It is also landscape architecture, as the site has many of the functional and esthetic elements of a park. It is also like an earthwork, as it is made mostly of shaped earth, and, perhaps more significantly, because it was made by an established artist who has made other earthworks.
Links: clui.org
758 views