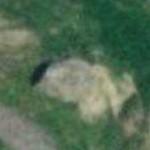 The stone was transported here by the ice during last ice age, and most of it is buried underground. The kind of large stones have always captured the imagination of the swing to where they came from? There are 2 stories about the Høvænge stone origin. It is said to be thrown by trolls from west to Nysted, but was so large that it did not reach full speed. The second legend tells that some creatures called "højfolket" have retrieved the stone from the bottom of Maribo Lake. They buried their gold and silver in it before they left Lolland. It is also said that the stone turns when it smells like freshly baked bread.

The large stone in the landscape also made by the ingenuity of the swing otherwise. Many of them are: the disappeared, beaten or blown to pieces and used for construction work.
Links: da.wikipedia.org
504 views