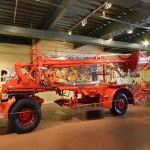 The oldest equipment in the museum, was used to fight fires in tall buildings. Originally pulled by two horses, it is pictured in 1930s parade pulled by a tractor. The 1934 Pirsch attached now pulled it from 1956 until it went out of service in 1974
613 views